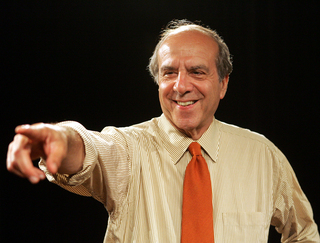 Stephen B. Shepard is the founding dean of the Graduate School of Journalism at the City University of New York. From 1984 to 2005, he was editor-in-chief of BusinessWeek, the largest business magazine in the world. Prior to that, he was senior editor for national affairs at Newsweek and editor of the Saturday Review.

He was also an adjunct professor at the Columbia University Graduate School of Journalism from 1971 to 1976, and co-founder and first director of the School’s prestigious Knight-Bagehot Fellowship in Economic and Business Journalism. He was a member of the School’s Board of Visitors, and served on its curriculum reform committee, headed by Columbia President Lee Bollinger.

In 1999, Mr. Shepard was inducted into the American Society of Magazine Editors Hall of Fame and received the Gerald M. Loeb Foundation Lifetime Achievement Award for business journalism. In 2000, he received the Henry John Fisher Award, the magazine publishing industry’s highest honor. And in 2003, he won the President’s Award from the Overseas Press Club. Mr. Shepard was president of the American Society of Magazine Editors from 1992 to 1994. He is a member of the Council on Foreign Relations, the Overseas Press Club, and the Century Association.

A native New Yorker, Mr. Shepard graduated from the Bronx High School of Science and received a B.S. from the City College of New York and an M.S. from Columbia University.

His journalistic memoir, Deadlines and Disruption: My Turbulent Path From Print to Digital, was published in September 2012 by McGraw-Hill.